My experience on Scrum simulation with LEGO

During last week I was running the Agile coaching sessions for 3 teams from one of my clients. For this sessions we did the Simulation of Scrum with Lego which turned out to be very interesting activity for the teams. 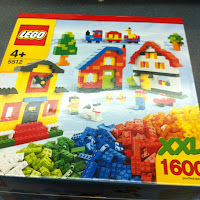 I used the technics from a paper published by @alexeykri and some more from a blog post from agile42 and the mix turned out to be very exhaustive for teams and for me. For the simulation I used the Lego TM  5512 basic brick set which comes with 1600 pieces. Which were sufficient for 2 teams of 4/5 people in each team.

We had a backlog of basic needs for a city like houses, school, shop, hospital, public transport, etc... which was presented to the team and the team was to estimate the time.
Once all was estimated, we planned for the iterations which took in to amount how many people each team and what they thought was best task for them...
Once the release plan was ready the team presented it to product owner and adapted it to the need of the business.
Then we started the iterations of 7 mins with 5 mins afterwords for review and 3 mins for Retrospective and this worked quite well.

I did introduce some sick leaves and rotating scrum master during the simulation and many people were wonder struck when they heard words "you are on sick leave" during 1st or 2nd sprints. Also rotations of scrum master role after each iteration spiced up the game a little as each one was able to understand the role. We also changed the Product owner role a few time.

I also did a few unforeseen addition like a Building Crane (Idea taken from Agile42 notes on the game) and it also surprised the teams (but dont we get new requirements in between the projects?)

In one case I even added a lake in the city and asked for a boat and port for the boat (wohoo!!) and the team did it (wohoo again)....

I am very happy with the results and the feedback doors were quite interesting mix.